The Merriam-Webster dictionary defines sentiment as, “an attitude, thought, or judgment prompted by feeling: predilection.: a specific view or notion: opinion.: emotion.: refined feeling: delicate sensibility especially as expressed in a work of art.: emotional idealism.”

As it pertains to the financial markets, market sentiment is the view or attitude that creates our opinion as to whether an asset class is overvalued or undervalued. It shapes and changes the value of a stock or commodity’s price.

The Federal Reserve raised rates at every FOMC meeting this year except in January, from March through November, a total of six rate hikes. Over the last four FOMC meetings (June, July, September, and November) they raised rates by 75 basis points. The aggressive nature of the Federal Reserve’s monetary policy moved gold dramatically lower from March up until the beginning of November. Gold traded to its highest value this year of $2078 in March. By the beginning of November, gold prices had dropped to approximately $1621, resulting in a price decline of 21.99%. 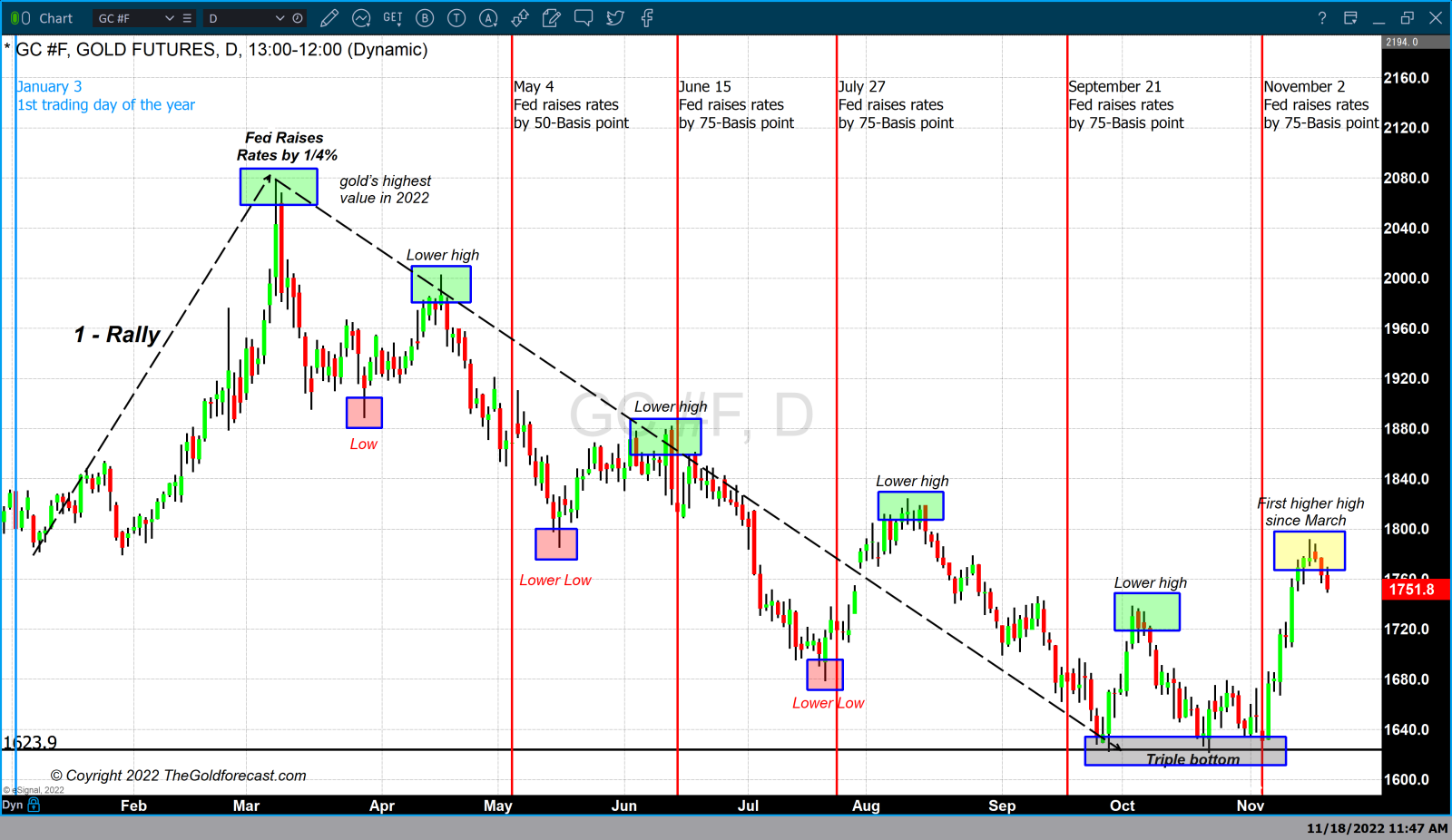 During the first week of November, market sentiment shifted because inflation rates had declined fractionally and investors viewed this fractional drop as a signal that the Federal Reserve would begin to loosen its aggressive monetary policy. This caused gold to rise dramatically from $1621 to an intraday high of $1792 by Tuesday, November 15. Because the CPI index dropped from 8.2% year-over-year in September to 7.7% year-over-year in October investors believed that the Federal Reserve would become more dovish regarding upcoming rate hikes.

However, Federal Reserve Governor Christopher Waller told a conference in Sydney, Australia Sunday November 13, "We're not softening…Quit paying attention to the pace and start paying attention to where the endpoint is going to be. Until we get inflation down, that endpoint is still a way out there." On November 14 multiple Federal Reserve officials made comments to the contrary.

San Francisco Federal Reserve President Mary Daly, “It’s far from a victory”. Lorie Logan the Federal Reserve’s president of the Dallas central bank said that last week’s report is, “a welcome relief”, but will not alleviate the need for more rate increases possibly at a slower pace.

The statements made over the weekend and on Monday, November 14 dramatically changed market sentiment concerning gold prices. Gold prices hit the intraday high above $1790 the following day and then began to have three consecutive days of price declines from Wednesday to Friday. To add fuel to the fire today St. Louis Federal Reserve President James Bullard said that the Fed’s benchmark policy right might need to rise as high as 7%.

The statements moved gold pricing from Tuesday's high to its current pricing. As of 4:27 PM EST, the most active December futures contract is currently fixed at $1751.30 after factoring in today’s net decline of $11.60. The statements will likely continue to create bearish market sentiment for gold.