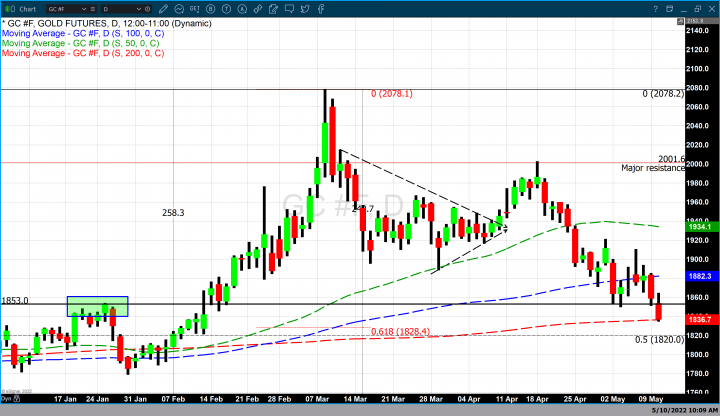 Traders and investors are waiting for the release tomorrow of the Consumer Price Index inflation report that will be released right before New York markets open. The CPI will probably be one of the most important economic reports to be released by the government this month. Not only will the CPI be an integral component that will shape and influence market sentiment of individual investors, but it will also help to guide the Federal Reserve’s monetary policy at next month’s FOMC meeting.

The Federal Reserve sent shock waves through the financial markets when Chairman Powell suggested that a couple more ½% interest rate hikes are a likely possibility at the June and July FOMC meetings. As expected, they raised the Fed funds rate by ½ a percent after this month’s FOMC meeting but the announcement by Chairman Powell of possibly three concurrent ½% interest rate hikes was perceived as hawkish and had a dramatic impact on markets.

With some exceptions, we have seen a substantial price correction occur in U.S. equities and in the precious metals. The cost of borrowing capital rising due to the Federal Reserve’s recent and anticipated rate hikes is intended to reduce demand by creating an economic contraction. This had a profound and negative impact on U.S. equities. Since the pandemic corporations in the United States have become addicted to free money and the extended correction is a reflection of the withdrawal pains by corporations as they adjust their forward guidance to reflect the change in the cost of borrowing capital.

Both gold and silver pricing have been in a defined corrective mode since the middle of April. Gold futures traded to a high of $2003 on April 18 and have been losing value for the last four consecutive weeks including this week which is still far from over. Gold futures basis the most active June 2022 contract opened at approximately $1884 and as of 5:06 PM, EDT is currently fixed at $1837.20 after factoring in today’s price decline of $21.40 or 1.15%. Gold has declined 2.49% in the last two trading days. 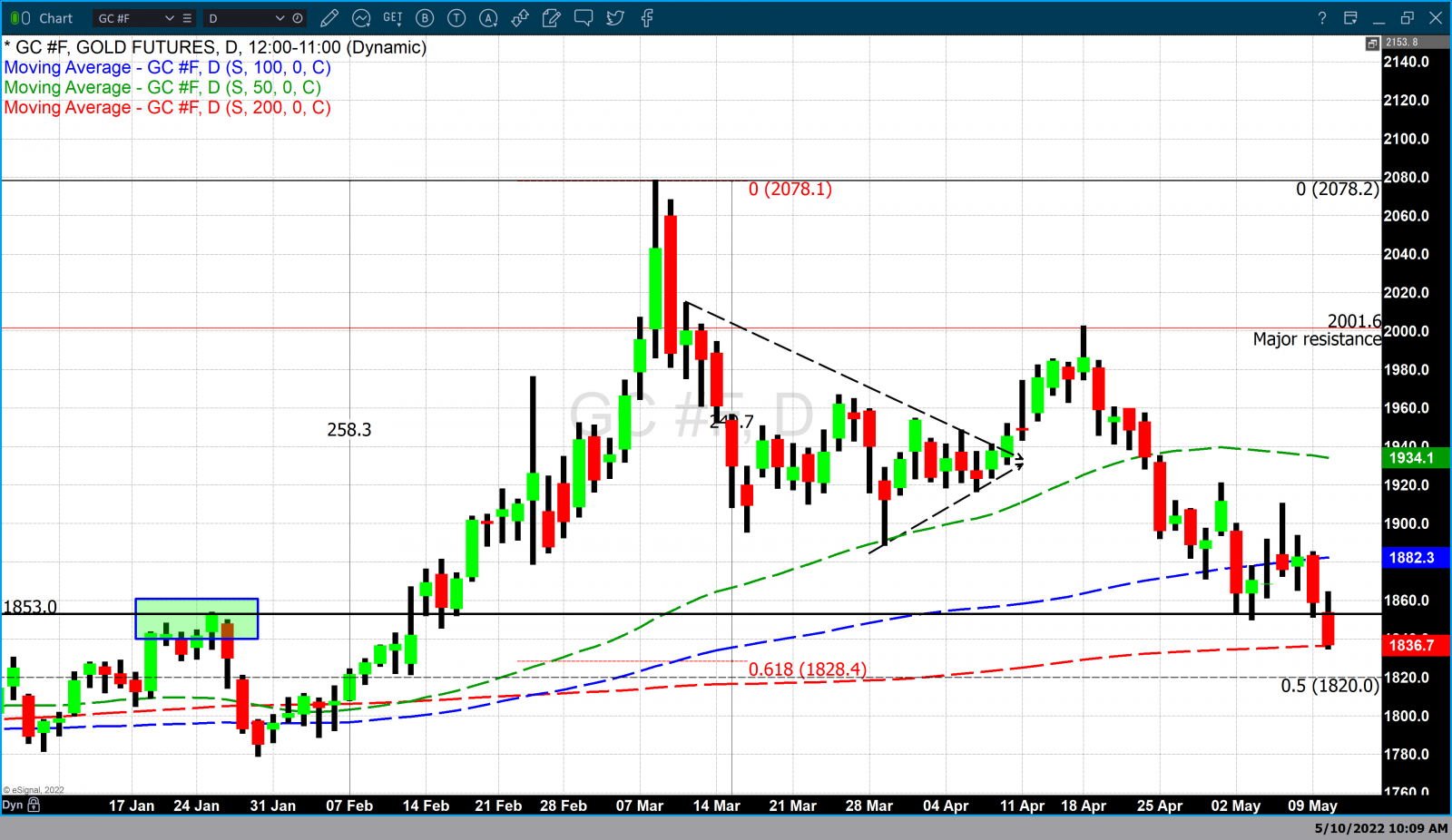 Typically, upticks in inflationary pressure create bullish undertones for gold prices as it is regarded as an excellent hedge against inflation. However, the current scenario which is a more aggressive Federal Reserve in regards to raising interest rates leads to rising yields in U.S. Treasuries and a strong dollar. Both dollar strength and rising yields have the opposite effect on gold prices creating strong bearish market sentiment as higher Treasury yields reduce investor's attraction to gold as it is a non-interest yielding asset and because gold is paired against the dollar, there is a 100% negative correlation between increased value in the dollar and gold pricing. The net result is that rising inflation took gold prices to $2078 during March (one edge of the sword) and then to its current pricing at $1835 (The other edge of the sword). The drop from $2078 to gold’s current price is a decline of 11.59%. Truly inflationary pressure is a double-edged sword for gold. 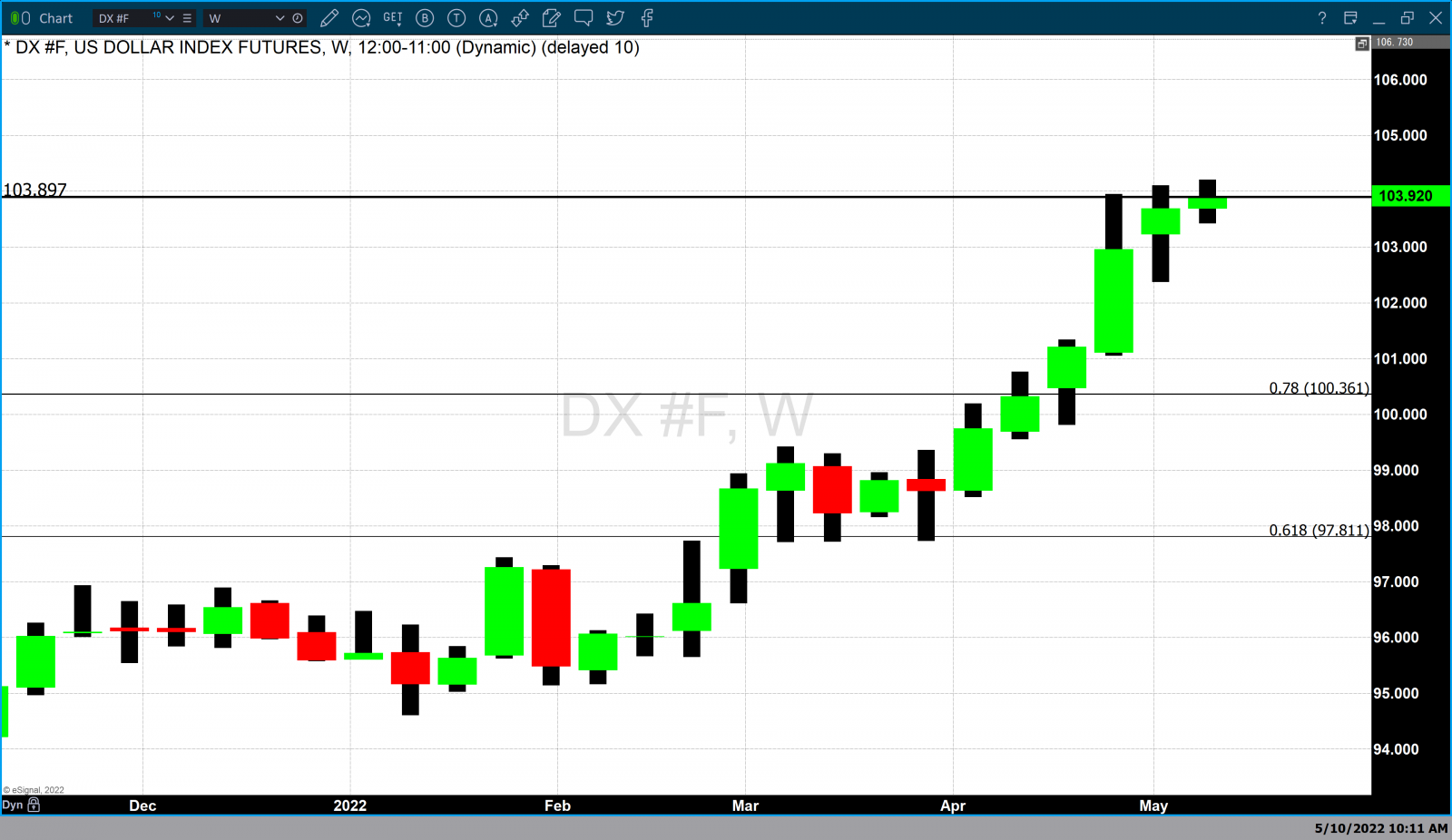 The latest forecast for tomorrow’s CPI report is that inflation will drop from 8.5% to 8.1%. The question becomes how will gold prices react if the actual numbers are above the current estimate? While high levels of inflation have historically been extremely bullish taking gold prices higher the anticipation of a more hawkish Federal Reserve will have the opposite effect.