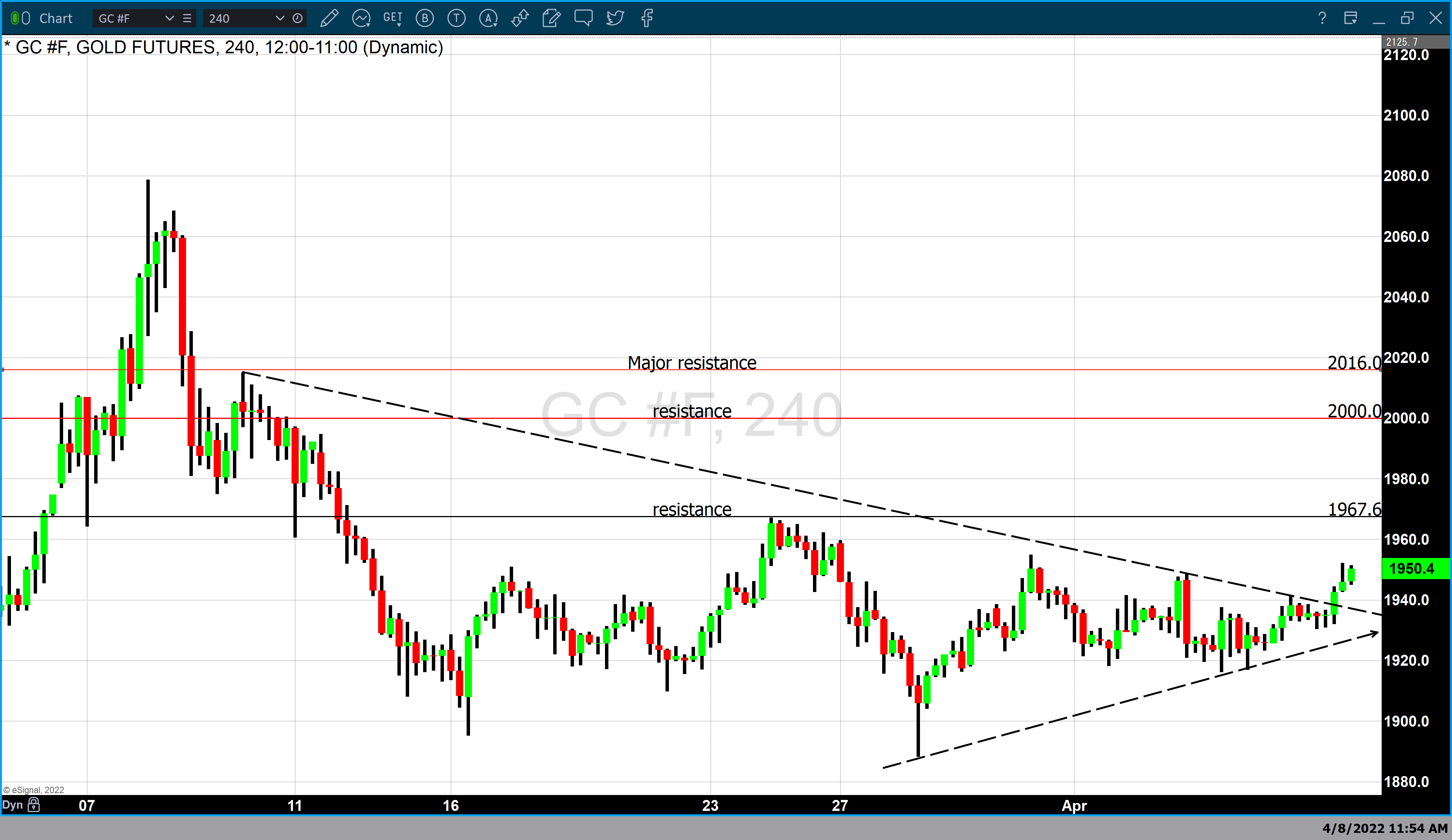 As of 4:44 PM EDT gold futures basis, the most active June 2022 contract is trading up $11.70, a gain of 0.60% at $1949.50. There were some alarming forecasts for the upcoming release of the latest inflationary data vis-à-vis the CPI (Consumer Price Index) on Tuesday, March 12. Just last week estimates were released by the Federal Reserve Bank of Cleveland which revealed a detailed estimate of the upcoming CPI report indicating that the level of inflation in March could run as high as 8.41%. Furthermore, estimates for the first quarter of 2022 predict inflationary pressures quarter over quarter could swell as high as 9.1%. 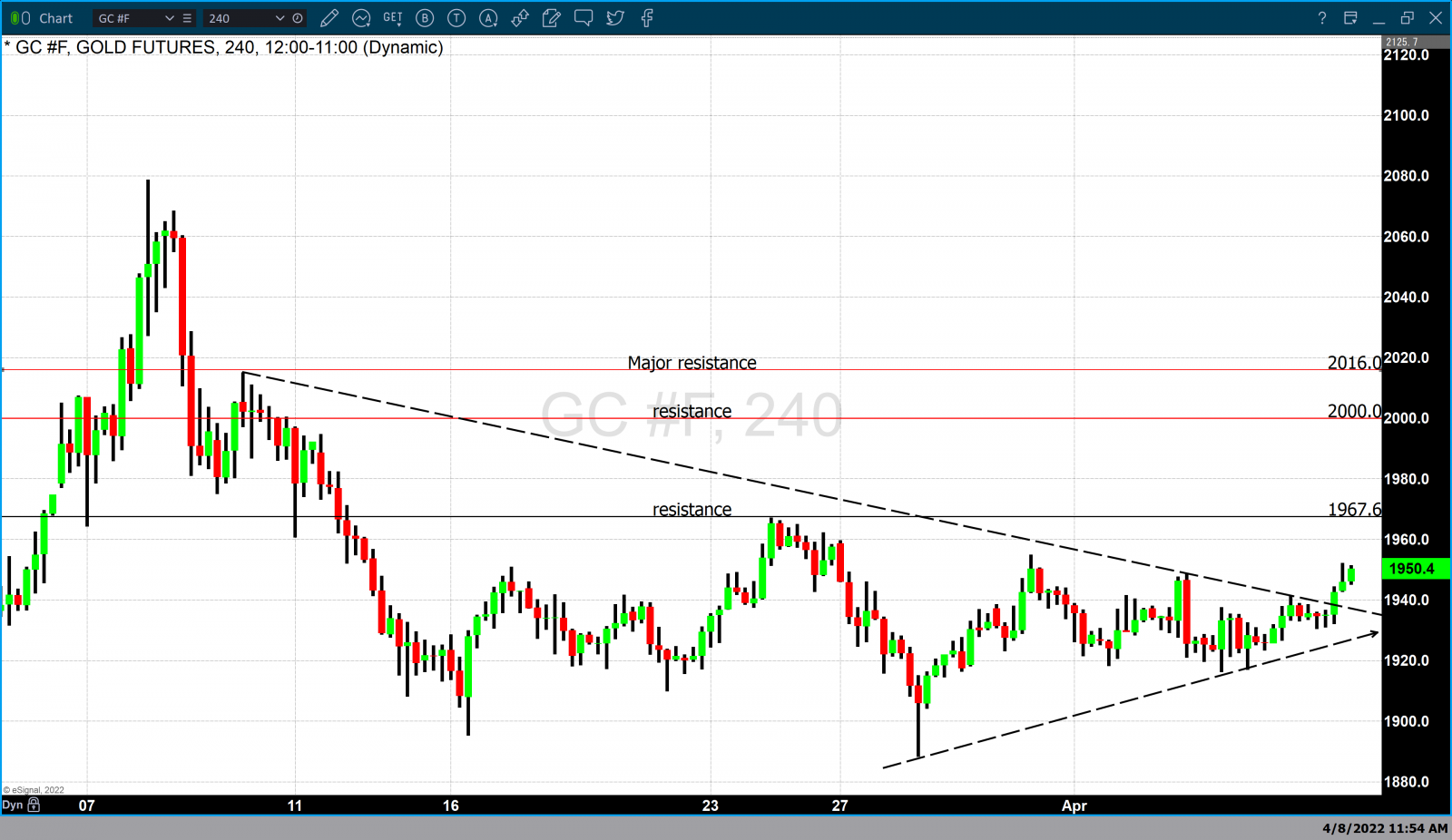 The chart above is a 240-minute candlestick chart of gold futures. We have included are trendlines highlighting a series of lower highs, as well as a series of higher lows. This has created a compression triangle and breakout above the current resistance level. This indicates that gold has concluded its consolidation period and moved back into a solid rally mode. This puts our next target for potential resistance at $1967.60. Above that price point, there is resistance at $2000 and major resistance at $2016.

While the Federal Reserve maintains that inflationary levels are peaking and should begin to decline throughout the rest of the year, this assumption is not written in stone as many variables could continue the rise of inflationary pressures throughout the year. One of the primary unknowns is the current crisis in Ukraine which resulted in global inflationary pressures due to supply chain issues regarding their agricultural exports to countries in the European Union, as well as the continuing boycott of Russian goods, oil of course but also much more, in response to Russia’s invasion of Ukraine. This has had a dramatic impact on the cost of crude oil worldwide. It also led to the release of over 200 million barrels from the strategic oil reserves of the United States and the European Union.

Russia’s escalated military action following its invasion of Ukraine continues to create geopolitical uncertainty and could prolong the rise of inflationary pressures which began as countries around the world allocated massive amounts of capital to stave off the recession which was a result of the global pandemic.

There is now concern that future actions of the Federal Reserve in its attempt to lessen the rise of inflation will lead to an end to the economic recovery, resulting in a return to a recession in the United States.

James Knightley, chief international economist at ING, said, “With the Fed seemingly feeling the need to ‘catch up’ to regain control of inflation and inflation expectations, a rapid-fire pace of aggressive interest rate increases heightens the chances of a policy miss-step that could be enough to topple the economy into a recession.”

Bloomberg News recently reported that economists polled have raised their U.S. inflation forecast again and downgraded their expectations for economic growth through most of 2023. This forecast is based upon the potential risks that result from the Federal Reserve’s attempt to reduce the current level of inflation.

Many uncertainties will continue to increase inflationary pressures globally. The confidence that the Federal Reserve can effectively execute a soft landing is waning among many economists. The assumption that the Federal Reserve will not have the ability to pull it off without causing damage leads to one of two things. The return of global economic recession, or the continuation of rising inflation. Either of these outcomes will have an enormous impact on economies worldwide and will continue to be highly supportive of safe-haven assets such as gold, moving them to higher prices.