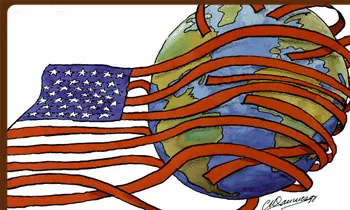 An End to Progress

"Progress may have been all right once, but it has gone on too long."

I’ve always been fond of that quote. Back when Ogden Nash wrote it, it was quite clever. Today, the quote is a bit less entertaining, as we are living in a period when, more and more, world leaders seem to be headed in the wrong direction – away from progress. As the Great Unravelling plays out, people are coming to the conclusion that the directions taken by their leaders are, not only the wrong thing to do but the exact opposite of the right thing to do.

The first category in which this seems to be true is economics. Most world leaders are quite committed to the idea that Keynesian economics will provide all the answers to solve any economic problem. However, the further each country goes down the Keynesian road, the clearer it becomes that Keynesian theory simply does not work. In fact, many countries that have followed it are on the brink of economic collapse, yet they are charging forward all the more determinedly with solutions that are based upon the very theories that caused the problems.

The second category is economic legislation. In most First World countries, particularly the US, legislators are making it ever-more difficult for businesspeople to function, as a result of the passage of ever-more complex and stricter regulations. The free market is, at this point, far from free, and there is a substantial flow of business away from First World countries as a result. Contrary to the claims of many politicians, most businesspeople are not following this exodus out of greed, but out of a need for survival.

When the above trend began, few people took much notice, but, in recent years, the changes that have taken place are becoming, increasingly, both more numerous and more frequent. At present, the frequency and severity of governmental developments have begun to resemble a runaway train.

As mentioned in the introductory paragraph, more and more people are becoming convinced as to the reality of all of the above – that we are reaching an "End of Progress." There does, however, seem to be a division in who they feel is responsible. Three theories follow.

People who see the control of their country in this light tend to live from election to election, each time hoping that their chosen party will take control of all branches of their government (such as occurred in the US between 2008 and 2010). On occasions when their party does succeed in doing so, they rarely seem to lose faith in this belief, even when their party fails to "right all the wrongs" as they promised they would if they gained complete control.

The followers of this theory tend to believe that the situation will not improve substantially, no matter who is elected.

A dominant perception of the identity of the Elite begins in 19th century Europe, with Mayer Rothschild, whose five sons are credited with developing a concerted plan for economic and political domination of the world. Their descendants are believed to have conquered America in the early 20th century when they and others created the US Federal Reserve. Since that time, the power of the Elite has slowly increased both politically and economically, whilst the Elite themselves remain well in the background.

From the beginning, a Rothschild tenet was to avoid the limelight, whilst pulling the strings behind the screen. With each generation, this concept has been more apparent, and, today, the family names that have been associated with the seizure of control tend not to appear in the media. The names of Rothschild, Rockefeller, Morgan and the rest have either become less visible or more closely associated with philanthropy in public awareness.

Theories differ as to whether the Elite plan a communist, socialist, fascist, or another type of state, but they agree that the goal is a statist system, with a minimum of personal freedom for the proletariat.

There appears to be a bit of a divide between those who support each of the above theories. Each group appears to give a nod to the others, whilst firmly focusing on their own theory as being correct. This is interesting, as the three theories are by no means mutually exclusive. Certainly, the idea that the Elite are the puppeteers of the Inept Legislators is a good fit.

If the first theory is the accurate one, it would seem that the present pattern of decline would be due to a battle between good and evil, in which the socio-economic structure is an unfortunate casualty of the battle itself. If the battle would only end (with the good guys as the winners), substantial progress would hopefully begin again.

If the second theory is the accurate one, a similar battle exists, but it is between two more-or-less equally-incompetent parties, neither of which seems to be able to sort things out. And again, the socio-economic structure is an unfortunate casualty. (This theory promises less hope than the first.)

If the third theory is correct (whether or not it is coupled with the second theory), we have a very different reality. In the Elite theory, whilst there may be a battle between the political parties, it would matter little to the puppeteers as to which party is victorious. In fact, it would serve their interest if the battle were never-ending.

Just as in the latter days of the Roman Empire, the public, if they are to continue to be controlled, needs a distraction – something to focus on rather than to focus on the real game. To an Elite, the political struggle is not so different from either the gladiators of the first century or the football matches of the twenty-first century. Both politics and sports are tried-and-true distractions from the otherwise central issue of the maximization of social and political rule.

Under the Elite theory, the almost-consistently negative developments that are occurring in First World countries would by no means be an unfortunate casualty; in fact, they would be occurring by design. For a New World Order to exist, based upon statist principles, with the vast majority of humanity as a class of serfs, an End of Progress is not only an acceptable by-product, it is a principal objective.

So, is this, then, merely an academic discussion, a curiosity for the brain to muse over? Not at all. Regardless of our own personal perception of what is causing the present condition, the objective for us all should be to be as open as possible to all interpretations, as the closer we understand the situation, the more likely we are to create an ability to step away from the fray and avoid becoming a casualty of it.