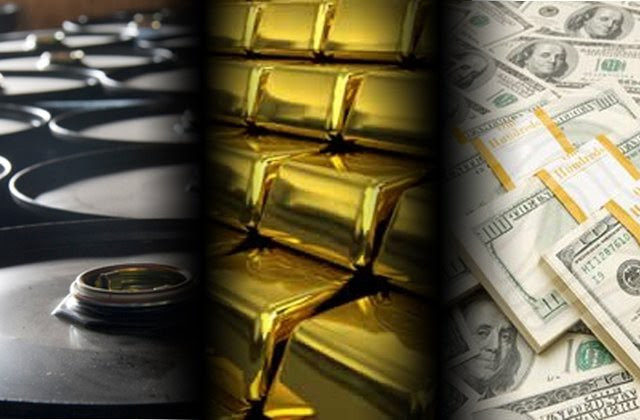 The End of the Petrodollar and What It Means for You

Oil for Gold (and Bitcoin)…

The US government reaps an unfathomable amount of power from its racket of printing fake money out of thin air and forcing it on the world. The petrodollar system is a big reason it has gotten away with this scam for so long.

Here’s how it works…

Oil is by far the largest and most strategic commodity market. For the last 50 years, virtually anyone who wanted to import oil needed US dollars to pay for it.

Every country needs oil. And if foreign countries need US dollars to buy oil, they have a compelling reason to hold large dollar reserves.

This creates a huge artificial market for US dollars and forces foreigners to soak up many of the new currency units the Fed creates. Naturally, this gives a tremendous boost to the value of the dollar.

The system has helped create a deeper, more liquid market for the dollar and US Treasuries. It also allows the US government to keep interest rates artificially low, thereby financing enormous deficits it otherwise would be unable to.

In short, the petrodollar system is the bedrock of the US financial system. That's why the US government protects it so fiercely. It needs the system to survive. World leaders who have challenged the petrodollar have ended up dead…

Take Saddam Hussein and Muammar Gaddafi, for example. Each led a large oil-producing country—Iraq, and Libya, respectively. And both tried to sell their oil for something other than US dollars before US military interventions led to their deaths.

Of course, there were other reasons the US toppled Saddam and Gaddafi. But protecting the petrodollar was a serious consideration, at the very least. When countries like Iraq and Libya challenge the petrodollar system, it's one thing. The US military can dispatch them with ease.

However, it’s a whole other dynamic when Russia and China undermine the petrodollar system… which is happening in a big way right now.

For this reason, the US is deterred from entering into a direct military conflict with Russia and China—even though they are about to strike a fatal blow to the petrodollar system. The top Russian energy official recently made it explicit. He said Russia would accept gold or Bitcoin in return for its oil.

"If they want to buy, let them pay either in hard currency—and this is gold for us… you can also trade Bitcoins."

Here’s the bottom line. The petrodollar system’s demise appears to be imminent. It has enormous geopolitical and financial consequences that most investors don’t understand.

The Real Reason for China and Russia’s Massive Gold Stash

It’s no secret that China and Russia have been stashing away as much gold as they can for many years. China is the world’s largest producer and buyer of gold. Russia is number two.

Today it's clear why China and Russia have had an insatiable demand for gold. They've been waiting for the right moment to pull the rug from beneath the petrodollar system. And now is that moment…

After it invaded Ukraine, the US government kicked Russia out of the dollar system and seized hundreds of billions in dollar reserves of the Russian central bank.

Washington has threatened to do the same to China for years. These threats helped ensure that China cracked down on North Korea, didn't invade Taiwan, and did other things the US wanted.

These threats against China may be a bluff, but if the US government carried them out—as it recently did against Russia—it would be like dropping a financial nuclear bomb on Beijing. Without access to dollars, China would struggle to import oil and engage in international trade. As a result, its economy would come to a grinding halt, an intolerable threat to the Chinese government.

China would rather not depend on an adversary like this. This is one of the main reasons it created an alternative to the petrodollar system. This system will allow anyone in the world to trade oil for gold. It will bypass the US dollar, financial system, and sanctions.

Here’s how it works…

After years of preparation, the Shanghai International Energy Exchange (INE) launched a crude oil futures contract denominated in Chinese yuan in 2017. Since then, any oil producer can sell its oil for something besides US dollars… in this case, the Chinese yuan.

There's one big issue, though. Most oil producers don't want to accumulate a large reserve of yuan, and China knows this.

PetroChina and Sinopec, two Chinese oil companies, provide liquidity to the yuan crude futures by being big buyers. So, if any oil producer wants to sell their oil in yuan (and gold indirectly), there will always be a bid.

Now that the US has banned Russia from the dollar system, there is an urgent need for a credible system capable of handling hundreds of billions worth of oil sales outside of the US dollar and financial system. The Shanghai International Energy Exchange is that system.

Other countries on Washington's naughty list are enthusiastically signing up. For example, Iran—another major oil producer—accepts yuan as payment. So do Venezuela, Nigeria, and others.

Even Saudi Arabia—the linchpin of the petrodollar system—is flirting in the open with China about selling its oil in yuan. One way or another—and probably soon—the Chinese will find a way to compel the Saudis to accept the yuan.

China is already the world's largest oil importer. Moreover, the amount of oil it imports continues to grow as it fuels an economy of over 1.4 billion people (more than 4x larger than the US).

The sheer size of the Chinese market makes it impossible for Saudi Arabia—and other oil exporters—to ignore China’s demands to pay in yuan indefinitely. The Shanghai International Energy Exchange further sweetens the deal for oil exporters.

Think about it… An oil-producing country has two choices:

The dismal financial situation of the US guarantees the dollar will lose significant purchasing power. Plus, there's enormous political risk. Oil producers are exposed to the whims of the US government, which can confiscate their money whenever it wants, as it recently did to Russia.

Here, an oil producer can participate in the world’s largest market and try to capture more market share. It can also easily convert and repatriate its proceeds into physical gold, an international form of money with no political risk.

From the perspective of an oil producer, the choice is a no-brainer. Even though most people have not realized it yet, it marks the end of the petrodollar system and a new monetary era.

A lot of oil money—hundreds of billions of dollars and perhaps trillions—that would typically flow through banks in New York in US dollars into US Treasuries will instead flow through Shanghai into yuan and gold. We could also see countries using Bitcoin to pay for oil, as the top Russian energy official recently suggested.

Ron Paul knows more about the international monetary system than almost anyone alive. He once gave a speech called "The End of Dollar Hegemony," where he pointed out the one thing that would precipitate the US dollar’s collapse.

Here is the relevant part:

"The economic law that honest exchange demands only things of real value as currency cannot be repealed. The chaos that one day will ensue from our experiment with worldwide fiat money will require a return to money of real value. We will know that day is approaching when oil-producing countries demand gold, or its equivalent, for their oil rather than dollars or euros. The sooner the better."

The bottom line is that China, Russia, and other countries will ditch the dollar and use yuan, gold, and potentially Bitcoin to trade oil. It will be the end of the petrodollar system, and it is imminent.

For over 50 years, the petrodollar system has allowed the US government and many Americans to live way beyond their means. The US takes this unique position for granted. But it will soon disappear. There will be a lot of extra dollars floating around suddenly looking for a home now that they are not needed to purchase oil.

As a result, expect inflation to skyrocket and a financial earthquake of historic proportions… One that could alter that direction of the US forever and mark the biggest economic event of our lifetimes.

The sad truth is, most people have no idea how bad things could get, let alone how to prepare…