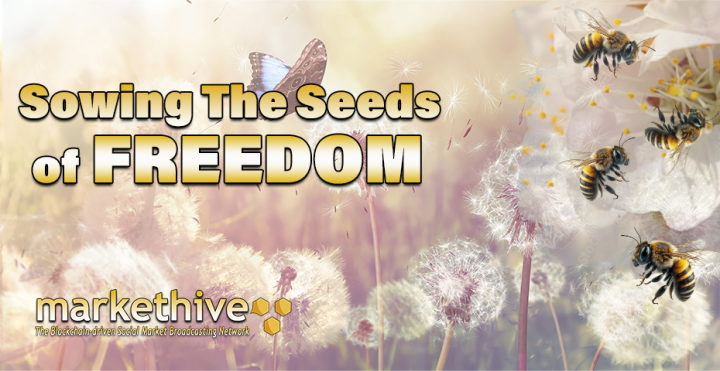 Sowing The Seeds of Freedom 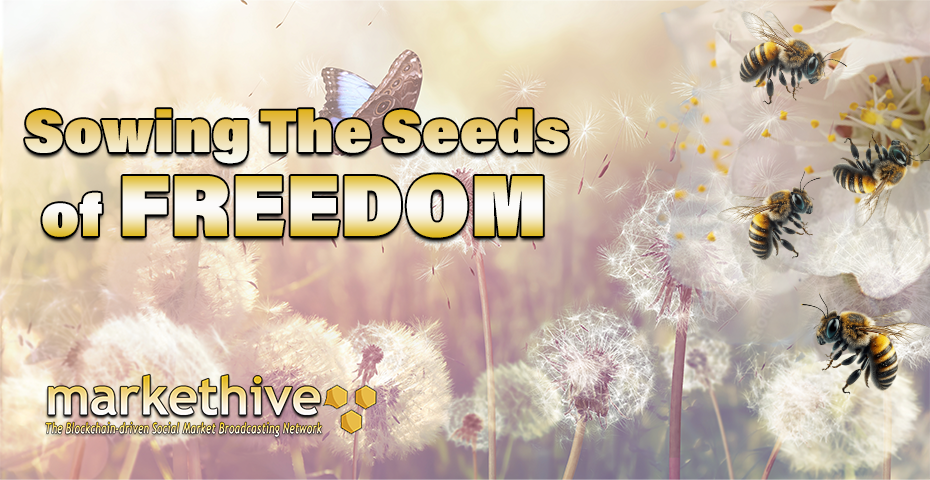 Freedom is something that has come under the microscope in the wake of the events of the last two years in a very intense way. In many ways, we have been forced to view it through contrasting themes, such as censorship of free speech, lockdowns, and politicized health mandates.

The question arises as to how we not only restore freedom but sow seeds of freedom that align with the highest natural law of the universe. 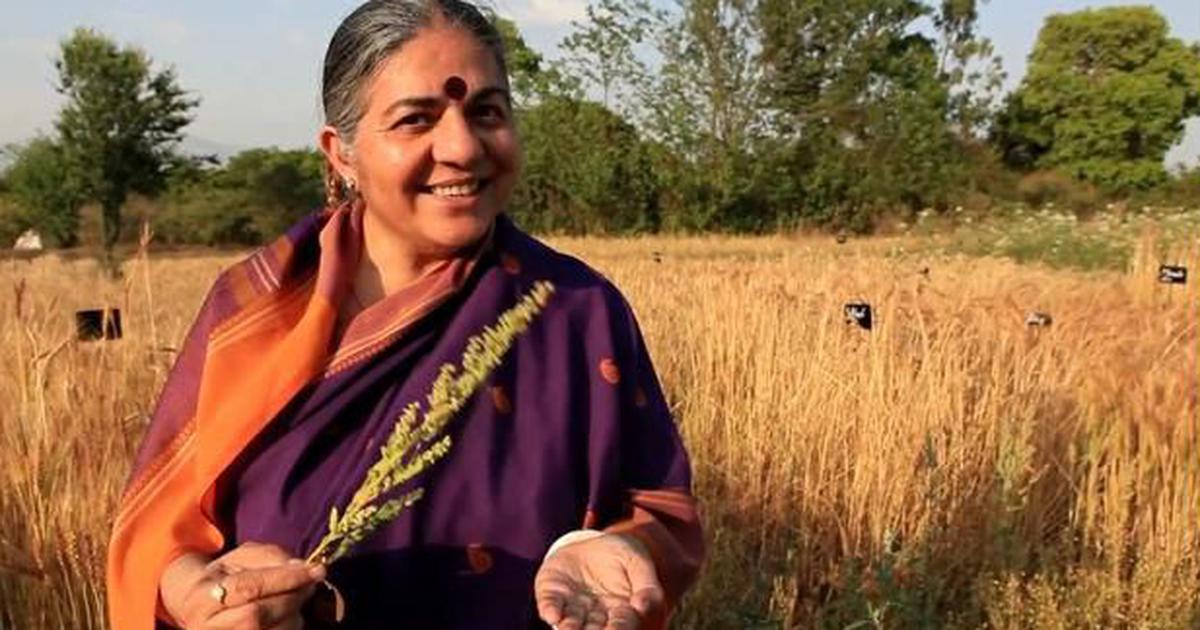 One of the constant courageous voices in this area is Vandana Shiva, an environmentalist in India and an award-winning author.

Beyond her impressive Ph.D. qualifications in quantum physics and studies in scientific disciplines, she leads by example, not rhetoric. So, I decided to read her book over the holiday period to learn from her experiences on the frontline and see what she advocates in the quest for the restoration of freedom for all.

The book in question is called Oneness v The 1%, written with her son Kartikey Shiva. I provide a summary of the themes in this book concerning her ethos in restoring true wealth and prosperity to her community, so you can draw inspiration for your own entrepreneurial and life activities despite the current challenges in the global economy.

Vandana Shiva sets the scene by posing questions she believes we need to revisit about the meaning of health, wealth, ecology, economic freedom, knowledge, intelligence, and democracy.

These questions are put against the landscape of existing challenges while she shares her perspective that true wealth is about well-being in every sense of the word.

The challenge, as she sees it, is the potential extinction of our planet brought about by the practices of the so-called one 1% who control money and use their power in destructive ways that go against the well-being of those they purport to serve.

She concludes that not only have they manipulated the market to drive a wedge between the people and well-being, but we are also being driven to a precipice, which requires a radical shift so that it does not become inevitable.

Here are some figures she lays out to back what she says. I have put them in tabular form below. These figures show how many billionaires have controlled as much wealth compared to over the last 12 years approximately. 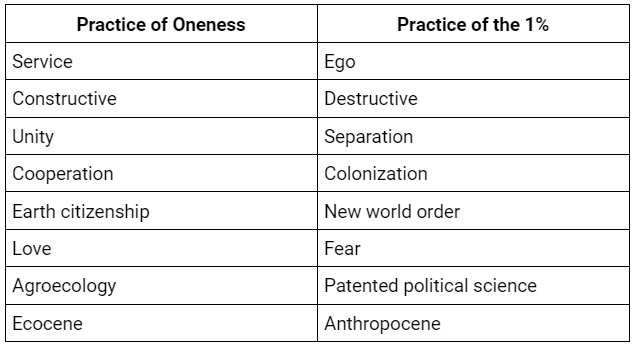 This is certainly not a picture of the few wanting to empower the many. I wonder what that figure is now in 2023?  Who is the driving force looking to reduce this further?

In the table below, I have captured a few of the contrasting themes between oneness and the practice of the 1% from my reading:

As with any action, there is a physical, mental, emotional, and spiritual layer present. On the theme of separation, which is a mirror opposite of oneness Vandana Shiva gives three examples in which separation shows up in the practice of the 1%.

She refers to this mind as one that is mechanical and linear in nature, which ‘allows the 1% to extract wealth from nature and society, defining their “extra activism” as scientific, economic and human progress.’

On the other hand, oneness recognizes the interconnected of all things. It seeks to reconcile those separations in partnership and true interdependence through ‘self-organization, intelligence, creativity, freedom, potential, autopoietic evolution and non-separability in nature and society.’

If you observe bees in a colony, they work in the spirit of oneness. Markethive is a commercial platform mirroring those values for entrepreneurs to construct positive commercial experiences.

This is a constructive use of a colony as opposed to the destructive opposite of the 1%, who wish to control everything for their unjust enrichment and for our enslavement.

In the face of major challenges, often, the question arises as to what difference an individual can make. Vandana Shiva makes constant reference to Gandhi as someone who influenced her thinking. 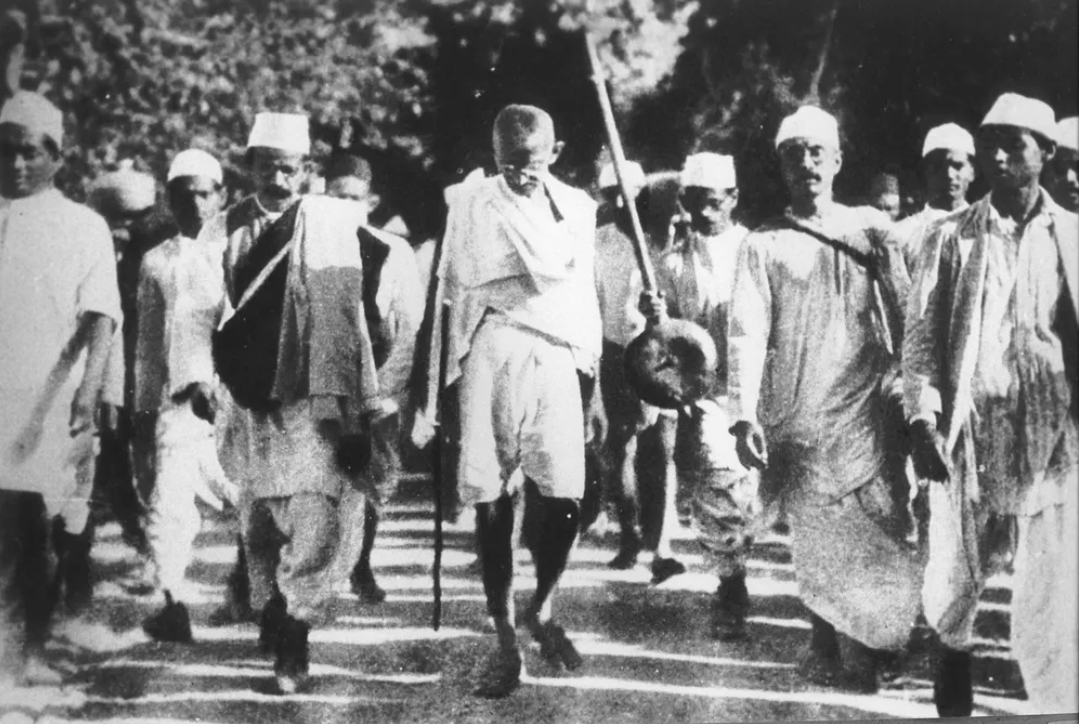 Gandhi is often remembered for his quote, “be the change you wish to see in the world.” If you accept this stance, then change starts from within, and it becomes a question of examining and adjusting perception to frame behavior and actions moving forward.

You might examine where your mind has underlined separation and look to reconcile your view that embraces oneness as a principle.

Where have you become separated from nature, from your fellow man and woman, and from yourself?  Where can you create reconciliation in those areas?

An Open Heart and Mind

It requires an open heart and mind, and a good example of this is provided in the book. Sir Albert Howard, an English botanist, traveled to India in 1905 with the intention of demonstrating western systems of farming.

What he discovered there caused him to retract and change his stance. He became a student of the local community to learn about the practices that had sustained their farming. He documented his learning and discoveries in The Agriculture Testament, which has become a major go-to handbook to many.

Vandana also answers that question from her journey. She acknowledges that while she obtained a Ph.D. in the fundamentals of quantum theory from the University of Western Ontario in Canada, it was the group of women activists of Chipko in the Himalayan forests of India who taught her about biodiversity and ecology. She sums it up here.

These brave Chipko women went head to head with the government, putting their lives on the line to preserve the integrity of the ecology of the forest and won their battle in 1981.

From the combination of education and experience at the feet of the Chipko women, whose activity turned into a movement, Vandana Shiva set up her own activity and movement for biodiversity, conservation, and organic farming in 1987.

This just goes to show what can happen when you combine an openness of heart with a solid education and then draw inspiration from those working in the trenches, capable of imparting wisdom beyond academia.

This can fan into flame the belief, desire, and willingness to step into what the heart knows to be true by getting involved in a grassroots movement or by starting your own initiative with like-minded individuals.

The Importance of Research

Beyond the qualities of an open heart, education, and inspiration lies the importance of research to document and anchor good practice.

For example, the practice of agroecology is not just about the protection of seeds for farming. The research which demonstrates the impact of the processes of biodiversity is equally important, especially given that the globalists use political science to manipulate data to fit their agenda and narrative.

The case of Norman Borlaug’s dwarf wheat, dubbed as a ‘miracle’ in the Green Revolution, was countered by such research and is a case in kind which demonstrates this essential practice.

The book is not just a good inspirational read. It is a call to action based on three enduring principles from India’s history by way of a framework to sow seeds of freedom.

Satyagraha – is about bringing the force of truth to be through real democracy, which involves non-cooperation and resistance to destructive practices.

Swaraj – is about self-responsibility in the way individuals govern their lives in the name of freedom.

Swadeshi – is about creating self-sustaining local communities according to the needs of that group. The Greek word for such activity is autopoiesis, meaning self and creation, the ability to systematically self-generate.

The examples of how the locals in India were able to protect the heritage of the land and its ecology, based on the above three principles, were truly inspirational. 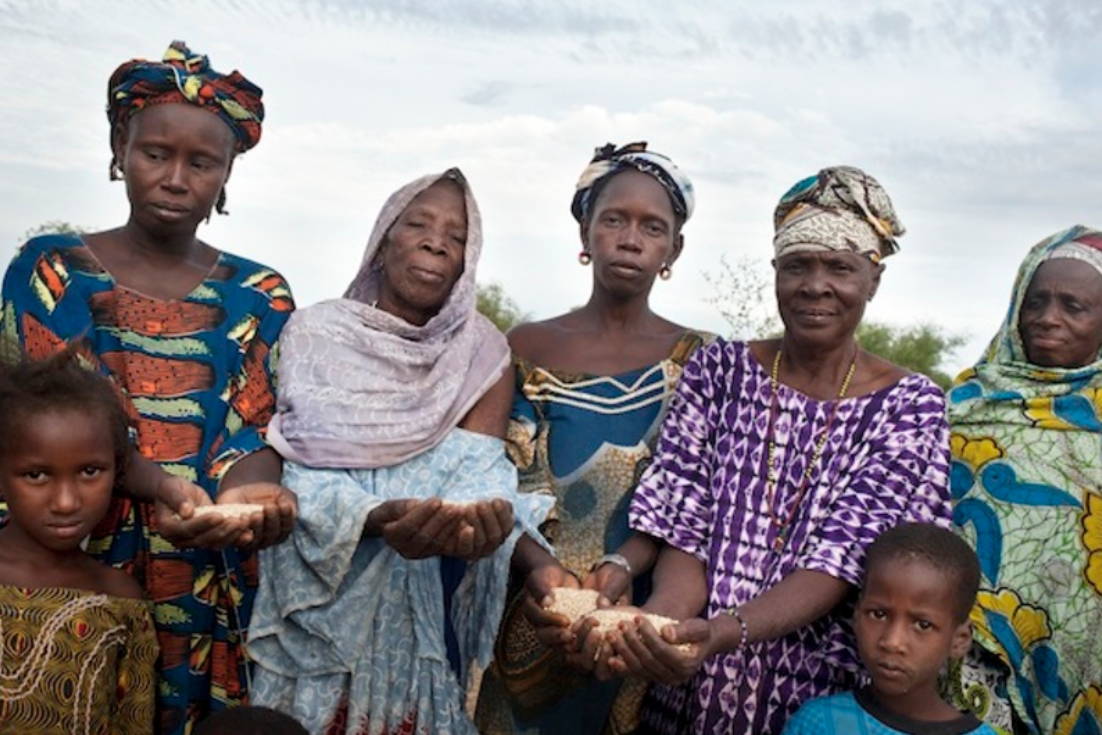 It has not been without loss and challenges, but when you read, for example, how five million women in India were able to make such a difference in protecting local food safety standards, it is a powerful reminder that a small group of committed people can make positive waves for humanity.

These examples support Vandana Shiva’s point that we cannot merely observe and protest. It is incumbent upon each of us to apply the principle of Satyagraha to our thinking and embody the solution according to our values, abilities, and talents in the vein of ‘being the change we wish to see in the world.’

By participating in the solution, we sow seeds of democracy because the nature of democracy is practical. We are the change we are seeking, and by calling out this change from within, we can both sow the seeds and reap the harvest of true democracy and freedom for the benefit of all.

About: Anita Narayan. (United Kingdom) My life's work is about helping individuals to greater freedom through joy and purpose without self-sabotage, so that inspirational legacy can serve generations to come. Find me at my Markethive Profile Page | My Twitter Account | and my LinkedIn Profile.